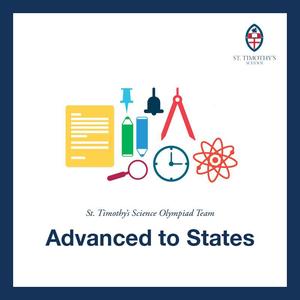 For the first time, an STS Science Olympiad team placed first at regionals.

Over two days in late February, the St. Timothy’s Science Olympiad team showed off their knowledge by virtually competing in 23 different events. Our team went head to head against 17 other varsity teams in the area during the Raleigh Region of the North Carolina Science Olympiad Competition.


The 15 students worked hard throughout the year to prepare for the tournament. Lillie Brickell (8th) and Dexter Brickell (7th) won first place in the Write It, Do It Division. Two teams placed fourth: Mac Cobb (8th) and Archer Taylor (5th) in the Fast Facts Division and Jack Markham (7th) and John Prater (7th) in the Mystery Architecture Division. Co-captains Lillie Brickell and Mac Cobb teamed up for the Road Scholar Division and placed seventh.


Lillie and Dexter Brickell will virtually compete in the State Science Olympiad Tournament on April 23 and 24. Including St. Timothy’s, there will be more than 30 schools at the state competition.


Congratulations to all of the members of the Science Olympiad team and good luck to Lillie and Dexter!