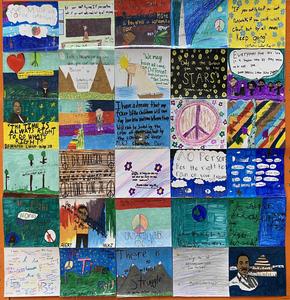 Discover what fourth grade is up to in February.
Throughout the year, fourth graders participate in the Trailblazer program, where they learn about influential men and women from around the world.

Every week, Kathryn Donohue and Ashlee Mense either show a presentation or read a chapter from "First Generation: 36 Trailblazing Immigrants and Refugees Who Make America Great" by Sandra Neil Wallace and Rich Wallace. After hearing about the featured person of the week, the class works together to create a "C-H-A-N-G-E" poem—the first word of each line begins with those letters.