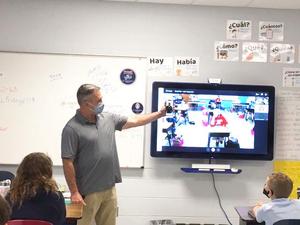 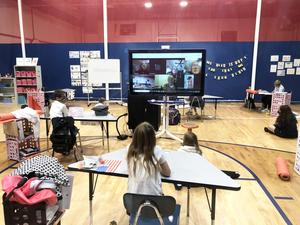 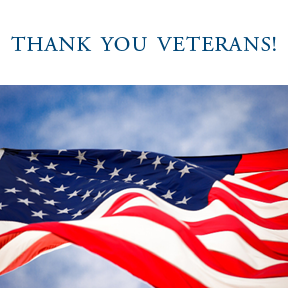 Our annual Veterans Day celebration looked a bit different this year. Traditionally, the school hosts veterans and has a chapel service, a parade to the gym for a school-wide discussion and breakout sessions in the classrooms. This year, we went virtual with thank you notes, videos and online meet and greet sessions.


Earlier in the year, families were asked to submit veterans’ names so the St. Timothy’s community could honor them. The associated student(s) and their homeroom then wrote messages of gratitude on cards that were mailed last week.


Lower school teachers created a video of students saying thank you and waving American flags that was sent to veterans. The students watched a video of the veterans introducing themselves and describing which part of the military they served in.


STS parent Daniel Johnson virtually shared with seventh and eighth graders his experience in the Navy. A North Carolina native, Johnson enlisted in the Navy during college. He served on the U.S.S. Blue Ridge, the flagship of the Seventh Fleet which was stationed near Japan. Johnson was a Division Officer and was in charge of 35 sailors. One day in August 1999, the ship was participating in an exercise near South Korea. The tug boats were pulling the ship out to sea and Johnson’s team was acting as the line handlers. A sailor got caught in the lines and Johnson managed to untangle him, but was injured and had a double leg amputation as a result. He later received the Navy and Marine Corps Medal for saving his comrade's life. Johnson told the seventh and eighth graders that “in spite of what I went through, the time was very meaningful. The lessons and experiences I had have shaped who I am and the rest of my life.”


Although St. Timothy’s honored veterans through an online format this year, it was still special. Students saw their family members, family friends or neighbors celebrated throughout the day. Thank you to all veterans and active service members!