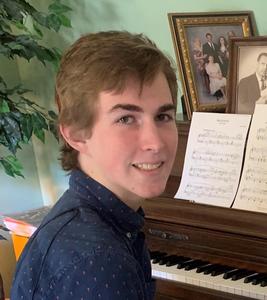 The STS eighth grader is the recipient of the 2020 Chick-Fil-A Second Mile Servant-Leadership Award.

Eighth grader Derek Fusco is the recipient of the 2020 Chick-fil-A Second Mile Servant-Leadership Award sponsored by the North Hills Chick-fil-A, which is operated by STS alumnus Rally de Leon. Derek's name will be inscribed on a plaque in the St. Timothy's School trophy case – and he'll receive a year of free Chick-fil-A sandwiches!

This honor is given to the student-athlete who displays humility, a positive attitude, good work ethic, good sportsmanship and great character.

This year, Derek was a member of the St. Timothy's cross country and track and field teams. "Derek is the epitome of going the extra mile," said Mike McConoughey, STS Athletic Director. "He was a great leader by example both during practices and meets, always making sure his teammates were doing the right thing and staying positive."

STS athletes and coaches were asked to submit candidates and include a brief statement about each nominee. Concealing the candidates' identities, Coach McConoughey presented the nominations to the Titan Athletic Club Board for a vote.