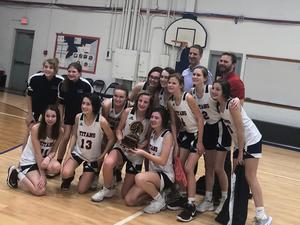 The team remained undefeated in conference play this season.

For the second year in a row, the STS Girls’ Varsity Basketball team took home the Capital Area Middle School Conference tournament championship. After defeating Grace Christian School and Cary Academy in tournament play, the Titans faced St. David’s School in the final game. With home-court advantage, the Titans defeated St. David's 30-18, taking control of the game after a close first half.

The team consisted of 10 eighth graders, many of whom were part of the championship team last year. Captains Mya Lemons and Macie Gross helped lead the team to victory with the guidance of Head Coach Mike McConoughey and Assistant Coach Jason Lemons.

Seventh graders Grace Palmgren and Grace Frances Longino along with eighth grader Mya Lemons were the top scorers for the season. The Titans were undefeated in conference play with a total of 12 conference wins.

“This team was a joy to coach,” said Coach Mike. “They worked hard throughout the season, and it showed in the final game.”