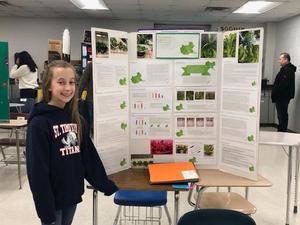 Congratulations to 134 STS students who participated in the STS Science Fair. Five were selected to compete in the regional science fair, and three of those students advanced to the state-level competition.

What do rocks, moldy bread and music have in common? They’re a few of the many great projects present at the St. Timothy’s School 2020 Science Fair. Over 130 first through eighth graders voluntarily participated in the fair held in early January. Each participant was interviewed by independent judges who reviewed the projects and determined the winners (listed below). Five of the winners were selected by the judges to move on to the Region 3A North Carolina Science and Engineering Fair held at Hillside High School in Durham on February 2.

The regional competition was a long, but very rewarding, day. Three STS students placed and earned a spot at the state-level competition. Fifth grader Cole Harris and third grader Isabel P. each won first place in the elementary division. Sixth grader Brooke Hershberger took third place in the Biological Science A Division in the juniors division. All three will compete against other regional winners during the state-wide North Carolina Science and Engineering Fair on March 27 and 28 at NC State University.

Congratulations to all of our enthusiastic scientists for going the extra mile!

Winners of the fifth through eighth grade STS Science Fair

Winners of the third and fourth grade STS Science Fair

Zoe Cavallaro (4th): My ‘eggs’ellent test with toothpaste (recommended to advance to Region 3A Science Fair)

Winners of the first and second grade STS Science Fair