Mindsets and "Grit" (... Or, How I Failed When I Tried to Teach Students About Mindsets and Grit) 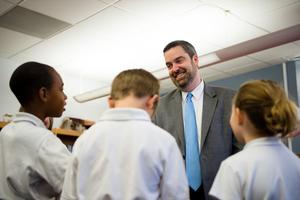 The most successful people see failure as a temporary state. How do we help our children embrace this idea?

I recently discussed with a group of our seventh and eighth graders an excerpt from the book Mindset: The New Psychology of Success, by Carol Dweck (2006, Random House Publishing).  It described nine-year-old Elizabeth’s first gymnastics meet.  She worked incredibly hard to prepare and expected to earn a ribbon in at least one event.  When she didn’t earn any ribbons (partially due to a scoring change), Elizabeth’s parents had to decide what to say on the long drive home.  Below are the choices Dweck offered; I asked the students which they thought was “right” for a parent to offer their child.

Dweck tells us that, by far, the best answer is choice #5.  My students were divided on whether #1-#4 was best, but they were unanimous that #5 was absolutely wrong.  Admittedly, Dweck chose to phrase answer #5 provocatively (later in the excerpt she writes, “Of course you wouldn’t say it quite that way…”).  However, her point is that answers #1-#4 are geared to protect Elizabeth from disappointment but don’t offer any opportunity to learn and grow from her failure.

Answer #5 incorporates what Dweck calls a “growth mindset”—the father should say, “Elizabeth, I know how you feel.  It’s so disappointing to have your hopes up and to perform your best but not to win.  But you know, you haven’t really earned it yet.  There were many girls there who’ve been in gymnastics longer than you and who’ve worked a lot harder than you.  If this is something you really want, then it’s something you’ll really have to work for.”

Still focusing on the original wording of answer #5, the students struggled with this idea, and they pretty passionately debated me throughout the discussion.  They thought it was cruel.  They thought Elizabeth would surely be in therapy by age 18.  They thought these parents were calling their child a failure.  One of the students asked, “Does this parent even love their child?!”

Dweck’s larger point—which, honestly, I’m not sure I ever effectively conveyed to my students because they were pretty fired up—was that we need a mindset shift to a “growth mindset.”  When someone with a growth mindset hears someone say they failed, they don’t assume that any judgment has been made about their inherent, permanent worth.  Instead, they see failure as an entirely temporary state, and as a motivator.  “You failed” to a growth-mindset person is actually, “You didn’t succeed this time.  What do you need to do differently next time to try again?”  There’s no shame in failure.

And I believe that’s the challenge for us as parents and educators.  Out of a fear that our children would ever become content with failure, we might misguidedly attempt to make failure shameful to them.  The problem is that they will inevitably fail at something… and then if we tell them “You failed,” the child hears, “I’m ashamed of you.”  Then they’re too upset by the failure and our shame to seek any ways to learn from it or be motivated by it.  Because we don’t want our children in such a position of shame, we address our children’s failures with statements like #1-#4.  It’s a vicious cycle.  What we really need is a strategy so that our children are not content with failure, but still not ashamed by it, either.

I encouraged my students to try to see it Dweck’s way.  Admittedly (and a bit ironically), I may have failed in this activity… but I know it’s not a permanent state, and I’m going to keep at it.  In the meantime, I’m going to soon share with them the following outstanding TED Talk video about what it takes to be successful.  In the hierarchy of TED Talks, this video on “GRIT” by Angela Lee Duckworth is essential viewing for everyone, and, based on her comments, Dr. Duckworth seems to be a supporter of Dr. Dweck, too.

It’s a great day to be a “gritty” Titan!

Return to From the Headmaster's Desk